Growing up in Sausalito in the 1960’s I lived up the Road from Julia “Girl” Dreyer.

One of her several brothers was my close friend in high school and college. I spent a lot of time in her spacious house. I always enjoyed my time in the Dreyer’s household overlooking Richardson Bay from high in the Sausalito hills.

It was my refuge. Julia was always very personable and outgoing with me. In a house filled with boys and young men she stood out as independent and assertive.

The memories of the Dreyer home are some of the most pleasant of my formative years.  The atmosphere, the music, the people, the ’60’s culture and the many good meals served up by Julia’s mom, Sylvia Dreyer.

Throughout her childhood, and well into her adult years, Julia Dreyer Brigden was known as simply “Girl.” As a photogenic ’60s Bay Area hippie – and the wife of guitarist David Freiberg of Quicksilver Messenger Service, Jefferson Airplane and Jefferson Starship – she traveled within the inner circle of rock royalty and wandered the world. 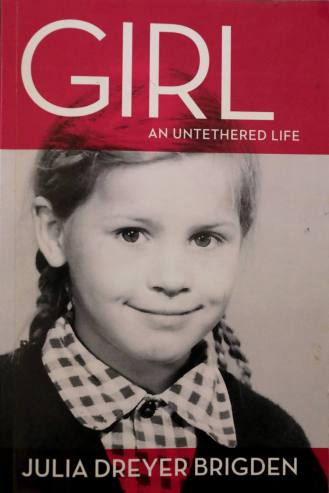 The Byrds celebrated her in a 1967 Chris Hillman tune titled “The Girl Who Had No Name.” Photos taken of her and her friends during a legendary Grateful Dead party at Olompali State Park were among the iconic images of the time.

Ultimately, folk music star Joan Baez asked her when she was going to stop calling herself “Girl.”

The nickname was hardly a counter-culture affectation, instead dating from her childhood in South Africa, where “girl” was a common term of endearment for a daughter, Brigden, 70, explains in her self-published memoir, “Girl: An Untethered Life.”

“I thought, ‘I’m gonna make this for my kids,’ but then it morphed into more than I planned,” Brigden said during an interview at her hilltop home north of Santa Rosa. She and her second husband, music producer and manager Mick Brigden, have lived in Sonoma County since 2001.

She wrote the book over a period of two years, including in a memoir-writing class at Santa Rosa Junior College.

As she began work on her memoir, her years among famous musicians, from Paul Kantner and Grace Slick of Jefferson Airplane to Mickey Hart of the Grateful Dead, yielded memories and anecdotes that drew attention from her classmates. “I’d come to class each week, and they’d say, ‘Tell us about Quicksilver. Tell us about this and that.’”

But the result is not a tell-all expose of wild times during the Age of Aquarius, although Brigden is frank about her own misadeventures, including her yearlong struggle with cocaine addiction in the early ’80s.

“That was not my finest hour. I was so disgusted and mortified with myself,” she said.

On the subject of free love, however, the book is demure.

“The one abiding mantra was ‘love one another,’” Brigden wrote.

“What that meant was not always clear. What were the rules on monogamy, for instance? Often the ethics were situational; whatever was most convenient at the time was cool.”

The book drops many famous names but reveals no specifics about torrid affairs.

“I didn’t want to throw people under the bus,” Brigden said.

“My husband said, ‘There’s no sex in the book. It’s more like softball, drugs and rock ‘n’ roll.’”

Her mother was the daughter of a prominent Cleveland family and her father a Dutch South African seaman who served in the British Navy during World War II.

The couple eventually settled in Marin County, where Brigden spent her teen years.

“It was a different time. If my child did the things I did, I would be panicky,” Brigden said.

“My parents were pretty laissez-faire. My mother was usually overwhelmed. She had five kids.”

As a teenager, Brigden began hanging out in Sausalito with poets and musicians, including young minstrel David Crosby – later of the Byrds and Crosby, Stills and Nash – who became her friend.

Early on Brigden, who had traveled with her family in Europe as a child, began to exhibit a lifelong and insatiable wanderlust.

She ran off to Mexico with a boy from Monterey while she was still a high school student. In the years that followed she trekked through India, Japan, Turkey and elsewhere.

“I was too naive to be worried, I guess. I got by on innocence. People were generally nice to me. I wasn’t fearful of people. I probably should have been.”

She married Freiberg at age 16 after landing briefly in juvenile hall for her runaway ways. Together they had a daughter, Jessica, who now lives in Novato with her own son, David.

Although Freiberg achieved success in the music business, the early years were lean, the book recalls.

“The first paying job Quicksilver played was at a private party,” Brigden wrote.

Brigden remembers Freiberg as a kind and tolerant man, who was patient with her restless nature, but eventually the couple parted. After her divorce from Freiberg in 1979, she married Mick Brigden in 1986. Through their music friends, she and Brigden had known each other since 1967. Their adopted son Jack now lives in Fairfax.

I had no expectations when I wrote this. To be honest, I am astonished people bought my book,” she said.

“I got a few reviews, and one bad one. It said the book was a ‘waste of time, full of narcissistic rambling.’ I figured that was written by a spurned boyfriend of mine,” she joked.